Here is a free download from Buffalo-born guitarist/composer Michael Pisaro. “Sculpture for the Blind” comes from his 2009 album, Hearing Metal 1. Download courtesy of the Free Music Archive.

From FMA website: “Sculpture for the Blind arranges eight layers of bowed [tam tam] sounds (which are then released) along a pattern of lengthening durations and combined with a sine tone trio, again woven into the sounds of the tam-tam.”

Pisaro bio from FMA:  Michael Pisaro (born 1961 in Buffalo, New York) is a guitarist and composer. A member of the Wandelweiser Composers Ensemble, he has composed over 80 works for a great variety of instrumental combinations, including several pieces for variable instrumentation. A particularly large category of his works are solo works, notably a series of 36 pieces (grouped into 6 longer works) for the three-year, 156-concert series organized by Carlo Inderhees at the Zionskirche in Berlin-Mitte from 1997-1999. Another solo piece, pi (1-2594), was performed in installments by the composer on 15 selected days in February 1999, in Evanston, Illinois, and in Düsseldorf in 2000-2001.

His work is frequently performed in the U.S. and in Europe, in music festivals and in many smaller venues. It has been selected twice by the ISCM jury for performance at World Music Days festivals (Copenhagen,1996; Manchester, 1998) and has also been part of festivals in Hong Kong (ICMC, 1998), Vienna (Wien Modern,1997), Aspen (1991) and Chicago (New Music Chicago, 1990, 1991). He has had extended composer residencies in Germany (Künstlerhof Schreyahn), Switzerland (Forumclaque/Baden), Israel (Miskenot Sha’ananmim), Greece (EarTalk) and in the U.S. (Birch Creek Music Festival/Wisconsin). Concert length portraits of his music have been given in Munich, Jerusalem, Los Angeles, Vienna, Brussels, Curitiba (Brazil), Berlin, Chicago, Düsseldorf, Zürich, Cologne, Aarau and elsewhere.

Check this out. Today the Free Music Archive featured the Upstate duo Buildings and Mountains (out of Oneonta, NY). Their label(s) Owl Records and Blood Dirt Cassettes is also now a contributor to the FMA under the name owldirt. Plenty of other good stuff up for download there so check it out.

[free music friday: Ric Royer & G Lucas Crane, Welcome to the Dark Cabinet of the Strange and the Weird]]

Ric Royer & G Lucas Crane, Welcome to the Dark Cabinet of the Strange and the Weird

On this week’s Halloween-themed episode of The Upstate Soundscape we featured two tracks from Ric Royer & G Lucas Crane’s Welcome to the Dark Cabinet of the Strange and the Weird. Here is the full album free to download courtesy of Baltimore-based Ehse records and the Free Music Archive. Perfect soundtrack for Halloween Weekend. Enjoy. 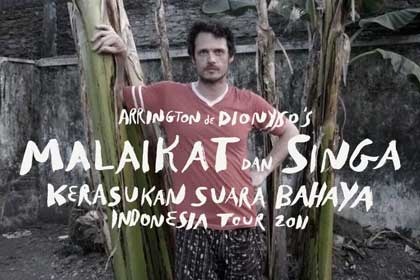 Earlier this year Buffalo was treated to two separate appearances by the trance-inducing, Old Time Relijun frontman Arrington de Dionyso in the span of a single month.

First there was the sweat-soaked Shaman-like performance at the Vault with his group Malaikat Dan Singa, which you can watch in its entirety here.

Then there was the transcendental collaboration with Buffalo’s free-jazz hero Steve Baczkowski at The Backroom. Both were unbelievable nights that confirmed Dionyso as a (other)world-class perfomer.

Now Arrington, who tours constantly, is headed to Indonesia. Arrington has long sung in the Indonesian tounge and now he is headed to the island nation for the first time to serves as resident performer for the Yes No Klub. More info on this below courtesy of the Free Music Archive.

Check out the free download at the top of the page Malaikat Dan Singa.

In September and October of 2011 Arrington de Dionyso will be making his first ever voyage to Indonesia, at the invitation of Yes No Klub -an experimental music collective from Yogyakarta. He will have several weeks’ residency in Yogyakarta where he will be teaching throat-singing workshops and creating murals while also collaborated with local musicians to create an entirely new version of Malaikat Dan Singa with Wukir Suryadi (Bambuwukir, Senyawa), Dani (Armada Racun), Ichan Sani (Armada Racun, Shoolinen) and other musicians from Indonesia. The tour will also featuring two finest contemporary artists: Senyawa and TerbujurKaku. Wukir Suryadi invite him to join his performance at four world music festivals, “Suara Mantra World Music Festival” in Mataram, Lombok island, “Space is Ours” in Denpasar, Bali island, “Bamboo World Music Festival” in Bandung, West Jave and a festival in Mount. Bromo, East Jave.

The journey with Malaikat Dan Singa started in Jakarta at SubStereo Oz Radio, “Jakarta Noise Fest #3” and at a fringe programme of “OK Video Festival”; then they will move forward to Bandung, Malang, Surabaya and the final performance will be held in Kedai Kebun Forum, Yogyakarta which also an exhibition of Arrington’s drawings. He will also publish a book of whatever paintings are produced during my residency for publication in a small artist monograph edition. Some of these concerts will be documented by film maker Vincent Moon, famous for his work with A Take Away Show and La Blogoteque. This project supported by Yes No Wave Music, Langgeng Art Foundation, Common Room, Ruangrupa, Insomnium, WastedRockers, KUNCI Cultural Studies Center and Kedai Kebun Forum.

About YES NO KLUB
A curated monthly series of events. The events will concentrate on cultural and musical exchange between visiting and local artists. Events will range from experimental / sound orientated performances through to more conventional band and electronic performances. The events will focus on presenting new and unheard sounds and combinations to the people of Yogyakarta and aim to link artists from Indonesia to an international network of experiemental/other musicians and sound producers.

Fantastic compilation of live in-studio performances recorded for the Montreal Sessions on CKUT 90.3. Artists include Element Kuuda, Sundrips, k.a.n.t.a.n.g.o., Dreamcatcher, Zachary Fairbrother, Rebecca Foon, and more. The performance share little in common except that they all defy any sort of easy genre categorization. Montreal Sessions airs every Tuesday from 3-5pm EST.  See more info from the Free Music Archive on the station and show below.

From the Free Music Archive post on the Montreal Sessions:

CKUT ‘s Montreal Sessions is an artist in residency programme that airs Tuesday afternoons from 3-5pm. Every month a sound new artist, musician, band, or curator takes over the 2 hour slot and programmes the musical selections, has guests in for interviews and live sets and/or has guests in every week for some free improvisation sessions thus turning the broadcast studio into a zone for experimentation and creation. This mix is a selection of some live epic live sets that happened on the show and or were recorded at ckut for air on the montreal sessions.

From the FMA CKUT Curator Portal:

CKUT’s music programmes run the gamut of genres and non-genres with a penchant for innovation and experimentation, niches of pleasure to titillate a variety of discerning listener’s tastes. Our broadcast studio is used as a zone for live experimentation, performance, and community involvement on a weekly basis. We don’t take ourselves too seriously and enjoy pushing the boundaries of what’s expected from a radio frequency.

CKUT is one of the largest volunteer owned and operated Campus/Community radio stations in Montreal, broadcasting 5000 watts of power at 90.3FM from the radio tower that crowns the peak of Mount Royal. The terrestrial range of the broadcast signal reaches about 150 kilometres around the city, with live streaming and six months of program archives available at ckut.ca. CKUT is supported by the students of McGill University, community members, and listener’s from Montreal and beyond.

CKUT is one of the the largest, if not the largest and most active Campus/Community Radio Stations in Canada. The station’s direction and programming is a result of the ideas and efforts of over four hundred volunteers who create live radio 24/7, 365 days a year. A volunteer owned and operated station, CKUT operates with a non-hierarchical collective management structure. CKUT’s programming is split into three categories with music occupying the largest portion of air time, and news and culture programmes providing the much needed space for marginalized voices and opinions.

No traffic reports, story assignments, play lists, listener surveys, or demographics to cater to, CKUT ‘s programming content is entirely in the hands of our volunteer hosts and producers who have free reign over the content that they send out over the airwaves, ensuring that the station’s programming is not dictated by some self appointed taste maker. 95% of the programming produced in house.

Got a great show planned for you tonight, so make sure you tune in to 91.3FM WBNY at 10pm for another episode of the Upstate Soundscape.

We’ll hear some interesting new stuff from ambient artists Devin Underwood and Marcus Fischer and a colloborative album they did together called Correspond. We’ll also check out a new and very challenging release from Rochester label Cae-sur-a by Novoe Tsarstvo and take a listen to one of the new Modselektor tracks that features Radiohead’s Thom Yorke on vocals.

Also got a solid block of great ethereal electronic sounds lined up from some of the leading ladies in experimental music including Grouper, Julianna Barwick, Laural Halo, Stacian, and Julia Holter.

And if we have time, we’ll check out some really cool stuff that popped up on the Free Music Archive this week, including a “Radio Play” recorded by Dreamcather for 90.3 FM CKUT’s ‘Montreal Sessions.’ (If we don’t get to it, I’ll post it to the blog later in the week. It’s too good to be missed).

Plenty of local stuff from Sound Shaman, Red Tag Rummage Sale, and Katastrophic lined up, too.  Show starts at 10pm on 91.3 FM WBNY. Stream at WBNY.org.