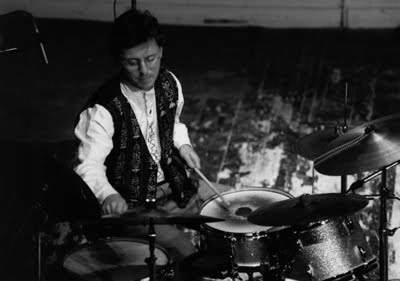 As the 2012 edition of Infringement Festival nears, how about we take a look back at a great performance from last year’s fest?

You can catch Improv Ork again this year on Thursday, August 2 at Hallwall’s.

Remember the Upstate Soundscape is an Infringement “venue” and will feature in-studio performances on tomorrow’s show and next week’s. Stay tuned for more info.

The Butcher-Bryerton-Khoury Trio/Baczkowski-Sack Duo Split is a cassette consisting of two live recording of free improv jazz jams that are dark and foreboding in a timeless manner. Like a lot of the sounds emanating from the House of Alchemy label out of Buffalo, the music itself leans in the direction of abstract, relying less on melody and more on evolving soundscapes that progress over time.

Beginning with the second side, we find the Buffalo-based group the Baczkowski-Sack Duo performing “Keet Seel.” The track begins with Bill Sack’s dissonant guitar clanking away over tape static-like sound, which is then soon joined by the distinctive saxophone work of Steve Baczkowski. Much of Baczkowski’s sax work here is reminiscent of early-90s John Zorn, except slightly less chaotic.

Perhaps the easiest way to describe the listening experience one is in for here is to compare it to watching a low-budget, black-and-white horror film on a public access channel at 3am. “Keet Seel” is isolating and claustrophobic, rapidly building chaotic tension that slowly falls and eventually dissipates into calmness.

At times the frenetic interplay between these Hallwall’s cohorts comes across as a random assortment of sounds, but other times it feels entirely deliberate and focused. The saxophone shape-shifts over the prepared guitar, taking form as a frenzied robot that we hear mentally self-destructing. This is the kind of abstract piece that inevitably gives rise to a lot of unique—and perhaps unsettling–mental imagery within the mind of the listener. It can be challenging to understand or appreciate, but the beauty makes itself apparent if enough attention is focused upon it.

The first side of the cassette comes from a trio led by the legendary British saxophonist John Butcher. Accompanied by percussionist Jerome Breyton and violinist Mike Khoury, the collective piece, “Untitled,” is in the same vein as–but definitely distinct from–the first side.

The biggest difference between the first and second side is the presence of percussion on the first side, which reinforces the haunting qualities and tone of the track. While not straightforward drumming in any sense, the percussion here instead adds flourishes and sonic brushstrokes that leave you feeling cold (in the best way, I assure you) as Breyton dances around his kit.

Overall, the album has a very interesting spirit that, if you are willing to open up to it, will leave a haunting impression on you. Recommended for anyone looking to hear a dissonant soundtrack of metanoia, and not to anyone alone in a dark room at night.

This recordings was originally posted over the summer during Infringement Festival 2011. Since it was recorded at Sugar City, however, and today marks the end of Sugar City at its Wadsworth location, it seemed fitting to re-post it to acknowledge what an important space this place has been.

Sugar City’s ‘30 Days of Awesome‘ ends tonight with one last peformance at Sugar City, with an after party scheduled at Hallwall’s, featuring a performance by UVB-76. More info here.

Good luck to the Sugar City crew in finding a new home.

Tons of great shows happening in the Upstate region in the next week or so and we’ll try to preview as many as we can tonight on The Upstate Soundscape.

Here is a sample of what we’ll try and get to….

Cloud Becomes your Hand at the Jungle Gym in Buffalo (Thurs, 4/12)

Nace/Kelly Duo with the Bazckowski/Sack Duo at the Vault in Buffalo (Wed., 4/18)

Also got a shit-ton of good stuff to get to that has been sent in to the show via Soundcloud. Should be an interesting show. Tune in at 10pm to 91.3 FM WBNY. Stream at wbny.org.

Also, you can see Ghost Father perform this Friday as one half of UVB-76 at Hallwalls. UVB-076 will perform Kraftwerk’s The Man Machine as part of the ongoing Kraftwerkers of Buffalo series.

Apparently, Hitler is not the only one upset over their inability to see Kraftwerk’s retrospective concerts at the Museum of Modern Art in NYC next week. Headed by the GalariesNFS, a group in Buffalo is organizing a “mirror event,” or string of shows from April 6-17 to honor the German electronic music pioneers and to give those that won’t get a chance to see the group live in NYC to take part in the retrospective (Hitler, reportedly, will not be able to attend due to being dead since 1945).

Details are scant, but it looks like things will kick off on Friday at Hallwall’s with a viewing of the documentary Kraftwerk and the Electronic Revolution, followed by a re-interperation of Kraftwerk I  by Jim Abramson, Scott Valkwitch, Pat Cain, & Gabe Gutierrez.

If more details emerge before airtime, I will be happy to impart them to you on the air. Regardless, we will do a block of Kraftwerk in honor of the event. *NOTE: The full schedule is now up on the FB Page.

Also! We have two tickets to give away to the Disappears, Lotus Plaza, and Location Ensemble show going down in Albany on Wednesday, April 18.  These tickets are courtesy of WCDB Albany 90.9 FM. Make sure to tune in to find out how you can win the tickets.

Edwards and Friedberg's set up at EMPAC for 'Hant Variance'

Other stuff we will get to tonight include a preview of the Peter Edwards and Sabisha Friedberg’s Hant Variance exhibition at EMPAC (which is tonight), an absolutely INSANE re-construction of a famouse Beatles song by Buffalo artists Wendy Carlos Williams, and plenty of other awesome, amazing stuff that no doubt will make your head explode.

[Visually Sound Sunday: Brent Green, ‘Gravity Was Everywhere Back Then’ Live at EMPAC]

Tonight at Hallwalls animated filmmaker Brent Green will be showing his film Gravity Was Everywhere Back Then. As you can see from the clip above, Green doesn’t just show his films, he also performs along with them. This clip was recorded at the Experimental Media and Performing Arts Center in Troy and should be a decent preview of what’s in store for us tonight at Asbury Hall.

Green is also in Buffalo to work on a new project in conjunction with Hallwall’s Artist-in-Residence Project. For more info on both tonight’s feature and the new project being partially made in Buffalo see the info below.

Leonard loves Mary so much he builds a house to save her life. Self-taught animator and HARPartist Brent Green built a town, a moon and stars to make a film about their love and our myths. “A tinkerer’s ode to a tinkerer, and a romantic’s tribute to a romantic, Gravity radiates an oddball homemade charm. The film, which belongs firmly to the American Eccentric School, tells the true story of Leonard Wood, a hardware store clerk in Kentucky who built a crazy-quilt house in the 1970s as a healing machine for his wife Mary, hoping to save her from cancer. (No go.)” – “A Healing House,” Rachel Saltz, New York Times, May 6, 2010

The Pennsylvania-based filmmaker recently premiered To Many Men Strange Fates Are Given—a kinetic sculpture installed at Sundance’s New Frontier and commissioned by the Experimental Media and Performing Arts Center—will present his critically acclaimed feature film, a stop motion animation based on a devastating and true love story. The live performance of Gravity Was Everywhere Back Then features an array of musicians, including Brendan Canty of D.C.’s famed hardcore band Fugazi and co-founder of Trixie Film); Gravity star Michael McGinley (of Chicago’s The Bitter Tears), Brooklyn’s Drew Henkels (Drew & The Medicinal Pen); with Donna K. on foley and live narration by Brent Green.

The presentation is in conjunction with the artist’s Hallwalls Artists-in-Residence Project, which will support Green as he begins pre-production on his latest feature Anatomical Maps With Battle Plans. In Buffalo he will begin recording both the narration and musical score that will serve as the basis for the film’s construction, and embark upon the first stages of a soundtrack that will draw upon “anxiously compiled” storyboards, notes, writings and drawings. Michael McGinley and Donna K., who stared in and collaborated with Green on his first feature Gravity…, will participate in the sonic development of a new home-spun tale based on mythic figures from Green’s family history. HARP is funded by the National Endowment for the Arts, a federal agency, and the Andy Warhol Foundation for the Visual Arts; Hallwalls Media Arts program is funded in part by the New York State Council on the Arts and the Foundation for Contemporary Arts.

After a several year hiatus Bear Flames re-emerged with a performance at Hallwall’s last month. Whether or not the reunion was a one-off is unclear at the moment*, but the avant-rock trio out of Buffalo has made available a bunch of their old stuff to download via guitarists Scott Valkwitch’s SoundCloud site. Enjoy.

*Note: Valkwitch has responded by saying that the Hallwall’s show was “not a one-off reunion and we have been rehearsin’ NEW material.”  After listening to the old stuff I have to say that’s welcome news.

Tons of good stuff happening this week so on tonight’s show we’ll preview each of them.

-Tonight actor/director Crispin Hellion Glover will return to the Market Arcade for a performance and film screening. To set the stage for the two-night appearance, we’ll hear a track off of  Mr. Glover’s 2006 album The Big Problem ? The Solution. The Solution = Let it Be. That’s right, the guy makes weird music, too.

-Friday night, Wooden Cities will be staging a performance of John Zorn’s improvisational-game piece Corba at Hallwall’s. Those unfamiliar with the Corbra concept can tune in to hear a past Cobra performance.

-And on Sunday, many members of the Albany Sonic Arts Collective will perform at the Upstate Artist’s Guild in Albany. We’ll hear songs from a number of artists that will be at Sunday night’s show, which is being put together as a benefit for the UAG. The UAG needs help to stay in its current gallery space and the ASAC, which has worked closely with the Guild since 2007, is hoping to raise as much money as possible to help the Guild out.