Here is a 2009 performance of Keir Neuringer at ISSUE Project Room. This recording catches the Ithaca native delivering a very powerful solo saxaphone performance in one of the most innovative venues in the US. Free download courtesy of the Free Music Archive.

ISSUE Project Room is Brooklyn’s leading presenter of experimental performance and music. It provides an open and versatile environment where both established and emerging artists can exhibit and perform new works that challenge and expand conventional practices in art making.

[Review: Afghanistan, ‘And Bide Your Time’]

When it comes to artistic expression, Ithaca’s Keir Neuringer is not limited to a single mode or medium. A quick online survey of the multi-instrumentalist’s offerings reveals him to be equally comfortable in the worlds of free jazz–as an Ayler-inspired alto sax player–or in the world of twisted experimental folk– as a searing, fiery protest singer–and many worlds in between.

Throw on top of this his excursions into agitprop video production and you get an artist that is bursting at the seams to express all sorts of interesting (and politically charged) ideas and always in an unpredictable manner. In other words, the guy can do it all and on his latest offering as Afghanistan with And Bide Your Time he in fact does do it all. All five tracks were recorded in single live takes, no overdubs, with Neuringer, like an electrified troubadour, singing, playing farfisa organ, and drumming. All at the same time (see the below video).

It’s interesting to ponder Neuringer’s stylistic choice on And Bide Your Time. As an artist he is clearly comfortable communicating in various forms, and as a musician he has a number of options he can choose from when deciding how to convey an idea. It is thus thought provoking that the Afghanistan project is draped in a carnevelisque gypsy-folk sound almost akin to Man Man (but with less emphasis on baroquish funk and more on straight-ahead topical protest). Despite the topicality of his rage-filled lyrics, however, the musical atmosphere created by Neuringer–despite the few instruments at his disposal–reaches a surreal pitch. So much so that the combination of wavy farfisa and foot-stomping percussion calls to mind the memorable scene from Fear and Loathing in Las Vegas where Depp and Del Toro struggle to escape from the absurdly horrifying Bazokoo Circus casino while loaded on all sorts of hallucinogens. At no time, however, does Neuringer’s music induce any sort of escapist mindset for the listener. This is not music designed to entertain or entrance you, but rather to confront you. His politically charged lyrics establish a commentary on the gruesome and grotesque nature of the world, bringing us closer to what is nothing more than a spectacle on television screens to most of us. The musical accompaniment he has crafted around those lyrics creates a cynical and satirical soundtrack for our ringleaders as they compel lions to jump through hoops and elephants to balance on balls.

Neuringer, however, does not only point his antipathy at the powers that be. His lyrics also serve as a mirror for his listeners and for those who share his political consciousness. In “Rocket Ships,” Neuringer laments, “You write letters but it’s not enough/So your march and protest and that other stuff/Yeah you get going when the going gets tough/And all that other stuff.” This feeling of futility that most who have strived to change the world inevitably feel at some time or another is dark stuff and, as with all the subject matter of his work, Neuringer confronts it head on, refusing to shy away.

Got a whole bunch of good stuff lined up for tonight, including new tracks fresh in from the House of Alchemy, cae-sur-a, and Skell labels.

Good show going down at the Vault tomorrow, so we’ll hear some of the artists that will be performing, including Ithaca’s Keir Neuringer, Toronto’s Colin Fisher, and the Steve Baczkowski/Bill Sack Duo from Buffalo.

Also, I recently took a trip to the UB music library so we got some archival goodies to get to as well, including some Tony Conrad, Pauline Oliveros, and others.

If we got time we’ll hear some other new stuff from old school droners Windy & Carl as well. Show starts at 10pm on 91.3 FM WBNY. Stream at WBNY.org.

U$ Drone is one of three releases that Ithaca’s Keir Neuringer–operating here under his moniker The Love Story–put out in 2011. This particular release is a refined, almost minimal organ drone routed through effects pedals that patiently unfolds and gently morphs over the course of 35 minutes. This is drone in its classic uncompromising form. It simply exists without the aid of distracting field recordings or gimmicky sound effects. This drone instead demands singular, focused, and prolonged attention.

In a year where drone got cute, Neuringer brings us back to the purist roots of the genre.

U$ Drone is also perhaps a suitable entry point into the broader philosophy of this interdisciplinary artist and multi-instrumentalist. For instance, immediately prior to a performance this past summer at the Back Room in Buffalo Neuringer sat perched at his drum kit, hands at his sides, staring intently at the small chatting audience before him. Patiently, he waited for the conversation within the intimate setting to cease before commencing with his performance. Despite not being the “headliner” Neuringer refused to begin his first song for the audience–the blistering socio-political track “Conquistadors”–until they were focused and, thus, ready.

Something important was about to happen and it demanded their undivided attention.

This 35-minute wave of sound is similar in that its creator makes no attempt to ease the listening experience for you. He does not try to coax you along, hoping to be there when you decide to start paying attention. The drone is here and now and it demands your full attention. No compromises.

As is the case with the rest of Neuringer’s work, regardless of the medium or the musical style, the payoff for the listener is immense if able to oblige.

Ithaca-based multi-instrumentalist Keir Neuringer is perhaps better known for the wide range of experimental music he has released, including the blistering socio-political Afghanistan project. Neuringer, however, does not limit himself to the sonic arts and is engaged in a wide array of artistic fields including video.

Below is a video that Neuringer created titled Things You Cannot See.

Description from Vimeo: The point of departure for this video was confrontation with photographic documentation of the carnage unleashed by the US-UK invasion and occupation of Iraq in 2003. Children killed or in hospital with limbs blown off, American pilots inscribing bombs, buildings and villages utterly destroyed. Approximately 250 such photographs appear in looped succession, but masked, because these gruesome and disturbing images are somehow “unseeable” by the culture largely responsible for creating them. The text that appears is didactic; there are things people actually cannot see (“love”), refuse to see (“The Geneva Conventions”), or can no longer see (animals made extinct by human activity). The music was created earlier as the opening for a piece of experimental Polish theater (‘Uronjenia’ by Pawel Jurek, produced by Teatr Modrzejewskiej in 2005), but operating in the video as something more than soundtrack. Relationships between and among text, music, video, and even typography prompt cross-perceptual impressions. 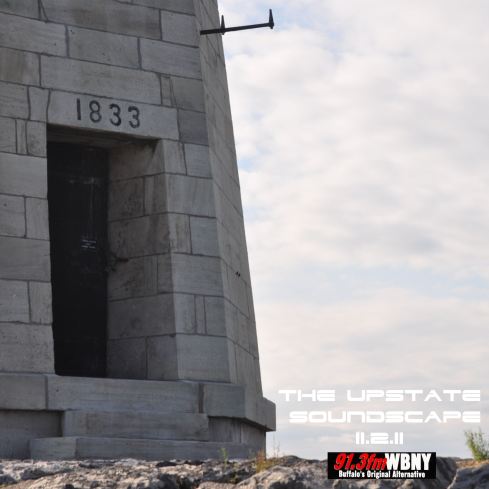 Lots of good shows this week in Buffalo, so we’ll preview each of them tonight on The Upstate Soundscape on 91.3 FM WBNY.

Next we’ll check out some music from trombonist Steve Swell who performs Friday night at Hallwall’s as part of the Undersound Fall 2011 concert serires.

Sticking with the jazz, we’ll also hear a track the Michael McNeill Trio, a improv jazz trio from Buffalo that has a new album coming out called Passageways, which is the recording from a live performance that took place at Hallwall’s this past December.

The album release party for Passageways is Thursday at The Backroom (behind Hardware) and will feature a performance from Bacon/McNeill.

And finally, we’ll hear something from indie band Vacant Lots, who will be performing tonight at Soundlab.