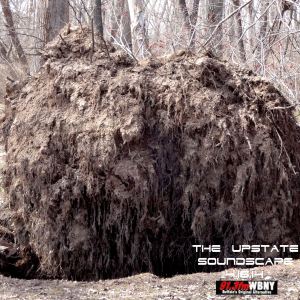 Also have some new stuff from Kristachuwan and Mark Kloud, two electronic producers out of Buffalo.

If there is time, we’ll also check out new sounds from Black to Comm, Autecher, and Benoit Pioulard.

14) Cinnamon Aluminum, “My Cyberface” We Ate the Wrong Crab Spirit

This week’s [Free Music Friday] comes from one of Buffalo’s stranger exports, frenetic folkie Michael Ersing aka Yes Yes. Ersing will be in town tonight for a homecoming show. On tour with Yes Yes is lofi electronic project Alphabets out of Denver.

Also on the bill are local artists Kristachuwan and Aye Karou. Show takes place at the Hop on Hopkins Street in South Buffalo.  Should be an interesting show.

Chris Svoboda is a multi-media artist who provides both a sonic underpinning and visual flash for his band Cinnamon Aluminum, an indie-psych trio out of Buffalo. Sonically, Svoboda handles beats, electronics, and saxophone; visually, he contributes artwork for the group’s album covers and designs the projections used in live performances. With Pterodactyl Fish–under his solo moniker Kristachuwan–Svoboda has built a bridge between his two roles as audio and visual artist by creating what he rightly calls a video album. The result is potent blend of swirling digital imagery and animation with pulsating electronic beats and psychedelic synths. Visual motifs closely follow musical cues (or perhaps its the other way around) while the movement of animated figurines are synced in hypnotic fashion to rhythmic sounds of all kinds.

While Animal Collective’s ODDSAC is perhaps the easiest reference to compare Pterodactyl Fish to since the two visual albums are psychedelic experimentations with the synthesis of audio and visual, there are other specific visual references within Pterodactyl Fish that film or visual culture aficionados will certainly appreciate. For instance, there a number of motifs that seems to spring from an appreciation of Japanese culture, including samurai mythology and anime characters. The neon outlined samurai that stoically stalks the viewer on “Samurai Haircut” (which was modeled by Cinnamon Aluminum band mate Mike Schroeder) could easily be a re-animated character from Akira Kurosawa’s 1954 masterpiece Seven Samurai.

Other visual influences that seem to be referenced include 1960s acid test projections, Adult Swim, early music videos, and all types of low-budget greenscreen work that you might stumble upon on public access television at 3am. All of these references, however, only explain the expansive visual grammar used within this project. One could perhaps  argue (unconvincingly) that the visual element of Pterodactyl Fish, on its own, is just a string of images linked together by a hipster film student; the beauty here though lies in Svoboda’s ability to beautifully interweave all of these disparate images and then interlock them with music that perfectly complements them to create a single, unified audio-visual experience.

At times, the work does have the feel of an MFA project; some transitions are a bit too abrupt, some motifs feel as if they have been discarded before they have culminated into their full expression. Regardless of these minor flaws—and their descriptions as ‘flaws’ is debatable—this is the work of a talented visual mind, one that is clearly going for it.

Watching Pterodactyl Fish might be akin to reading an early short story by a great author who would later go on to develop a distinctive and recognizable voice. Initially, however, that distinctive voice may not have quite translated itself out of the mind of the artist and onto the page, or in this case the screen in front of the viewer. The creative training wheels haven’t quite come off as the artist is forced to lean on homage a little longer before the truly unique creative voice emerges. But anyone who appreciates the creative process and artistic development must intrinsically sense this and be thrilled by the audacity of Svoboda’s efforts here and where he might be going next.

Regardless of what may or may not be in store for Svoboda, as musician or visual artist, this particular work right here really deserves to be seen in a communal theater setting on a large screen with its electronically pulsating sounds pumping out of a solid speaker system. It is laced with stunning visual ideas some that last ever so briefly, as if they were only tiny ideas meant to evolve into a more expansive and important idea. What exactly is that important idea? Hard to say, but it is certainly worthwhile trying to figure it out.